Plant a tree in memory of Sheila
An environmentally-friendly option 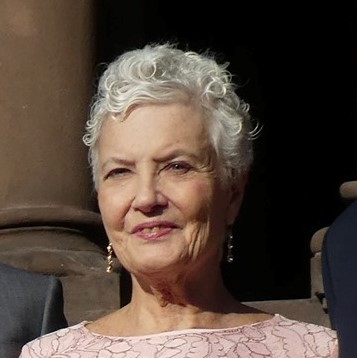 Sheila grew up in Dorchester, Ma where she graduated from St Gregory's High School in 1965. After high school she attended Emanuel College where she received a Bachelor of Arts in Elementary Education & Art History.

Sheila began work as an elementary school teacher in Boston Public Schools; then worked as a receptionist for the Greater Boston Chamber of Commerce; and was an insurance claims analyst for 20 years with Blue Cross Blue Shield, Tuft’s Health Care, and Dell.

Sheila was most proud of her beautiful family and enjoyed family parties, spending time with her friends, and doting over her grandchildren.  She had a zest for traveling and spent a college semester abroad in Italy. She also traveled to England, France, Germany, & Switzerland. Sheila enjoyed telling stories of her worldly adventures.

Sheila is survived by her partner Craig Lovell of Wellesley, her son Michael and wife Nicole Delany of Plymouth, son Stephen Delany and wife Alicia Jabbar of Bend, Oregon. She was a devoted grandmother to Colin, Leo, & Quinn. She will be dearly missed by all who knew and loved her.

A celebration of life will be announced at a later date.

In lieu of flowers, donations may be made in Sheila’s name to the Dana Farber Cancer Institute, PO Box 849168, Boston, MA 02284 or www.dana-farber.org/gift

Plant a tree in memory of Sheila by clicking here.
To send flowers to Sheila's family, please visit our floral store.

A service summary is not available

Plant a tree in memory of Sheila
An environmentally-friendly option

Plant a tree in memory of Sheila

2 trees planted in memory of Sheila

Will remember Sheila in Masses and prayer.  Deepest sympathy for your loss, my thoughts are with you, Rev.  John Spencer, S.J. ( retired Mission Vice President of Emmanuel College and old family friend.)

A Memorial Tree was ordered in memory of Sheila L. Delany by Gail Curtis .  Plant a Tree

Sheila,
Rest in peace and now you can see all of those in your family who went before you.
I loved you,
Gail

Sheila and I were close friends during our teenage years.  A few years ago we reconnected and kept in touch and enjoying lunches and dinners together.  I am so sorry for your loss.  She was a lovely, kind, and caring friend. I am so sad.  Prayers offered for her family

Sheila will remain in the hearts of all who loved. her. We worked together for years with a friendship that grew over 45 years. We laughed every time we spoke on the phone or met for dinner. She had the sweetest nature and was so caring of others. I will miss her so much. I love you Sheila and we'll laugh together again one day.

Plant a tree in memory of Sheila